The Casper Network is up to 136000% more energy efficient when compared to other networks.

The environmental impact of mining has become an important topic as mainstream interest in blockchain technology and cryptocurrencies continues to expand globally.

Blockchains like Bitcoin and Ethereum rely on Proof of Work algorithms to complete the cryptographic calculations required to mine, and thus result in high energy costs. Research from the University of Cambridge’s recent bitcoin electricity consumption index showed that bitcoin mining alone is utilizing around 0.6% of the global electricity consumption. Nobody doubts that blockchain is a powerful and transformative technology being used across an ever-growing range of sectors, but its energy footprint as an industry is unsustainable at the current pace. 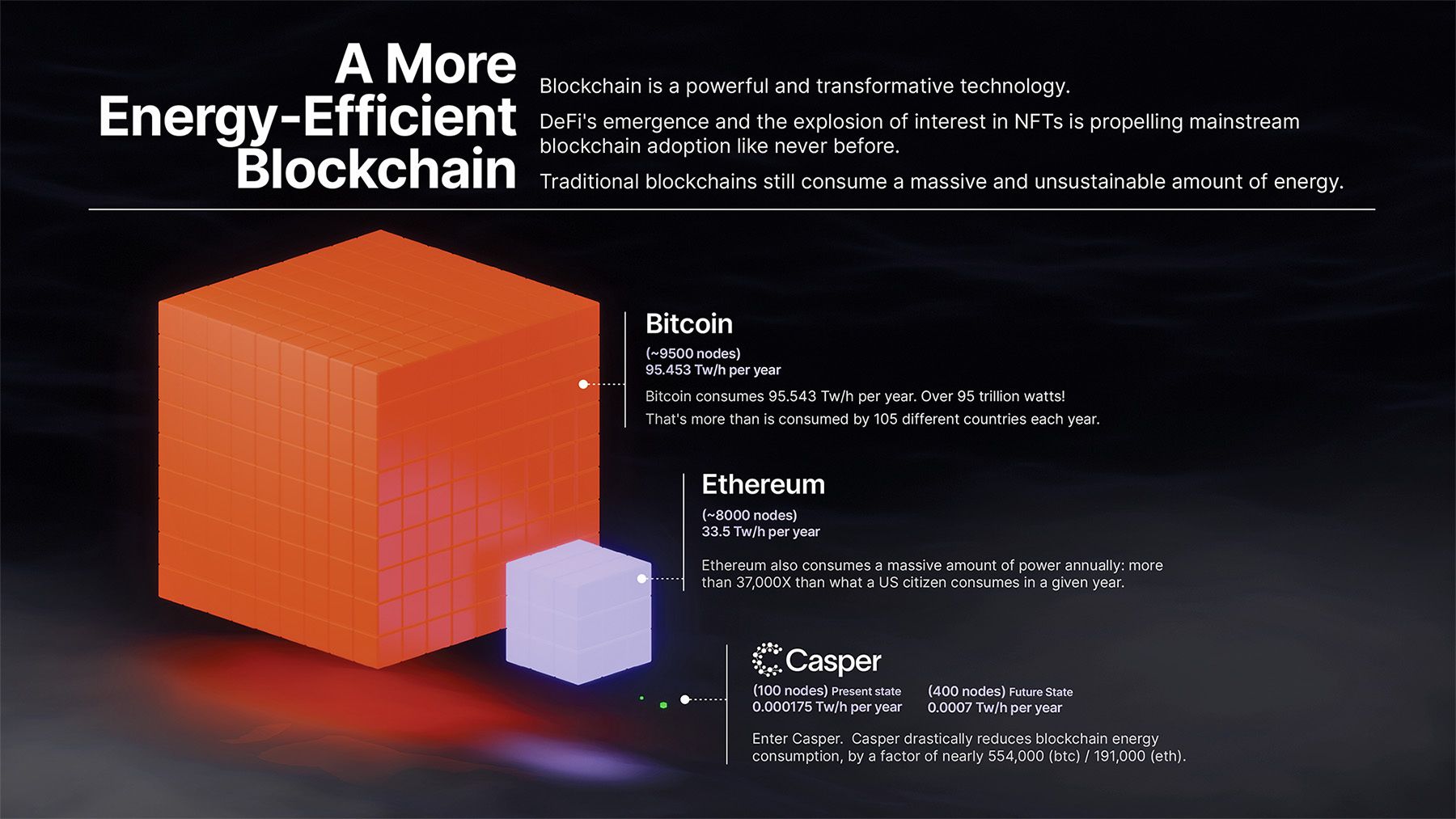 In efforts to measure just how much more energy efficient the Casper Network is over alternative blockchains, CasperLabs developers recently ran power usage comparison numbers between solutions. They started by looking at the power consumption of a single node with the Casper Network.

Typically, CPU and RAM are the predominant power consumers from an idle state to a full load status for a node, and the recommended specs to run a Casper Network node are 32GB of RAM and 4 cores. As AWS instances are scaled with both vCPU and RAM in a family, the RAM is included in the factors.

Here’s the value chart the team used for their calculations:

In order to avoid underestimating consumption, the researchers assumed an average power draw of the node to be 200W, which is at least 8 times the real value for a cloud host and most likely at least double that of a local purpose-built server. They then calculated the hourly usage of the Casper Network at 400 nodes x 200W or 80,000W (80 kilowatts) per hour.

To put that into perspective, Ethereum’s total is more than 37,000X the average energy amount consumed by a US citizen in a given year, and Bitcoin consumes more energy than 53% of the world's countries (105 countries).

Using this chart for comparison, the report concluded that the Casper Network at 400 nodes is 47000% and 136000% more energy efficient when compared to Ethereum and Bitcoin respectively.

The team then calculated a percentage comparison for energy consumption of the Casper Network scaled up to 10000 nodes. These were their findings:

Overall, the data from the power usage report shows that the Casper Network consumes far less energy over the course of a year when compared to other networks by a factor of nearly 5540 (btc) / 1910 (eth).

“Interest in blockchain technology has never been higher, which has understandably driven historically high activities across different networks. It’s clear that we’re not currently on a sustainable path as an industry when it comes to energy consumption. As more enterprises and governments prioritize more environmentally responsible technology, it’s imperative that we as an industry rise to the challenge. Casper introduces a more sustainable model that allows organizations to have the best of both worlds when it comes to leveraging decentralization in a far more environmentally conscious manner.”

As mining energy consumption continues to be a part of the global dialogue around blockchain technology, it’s important to consider greener alternatives with a lower carbon footprint like the Casper Network and its Proof of Stake solution.

A special thanks to CasperLabs’ Amit Patnaik and Joe Sacher for their efforts to establish these benchmarks.